The new package, which includes a review of the Gender Recognition Act, says very little of note.

Nicky Morgan, the Women and Equalities Minister, said she was ‘proud’ to reveal the report that includes more calls for review, and to collect more evidence, in the way gender identity services are provided to the public.

The Government said it will look for ‘better ways to collect information about transgender people, including a study to measure the size of the UK’s transgender population’.

The British Social Attitudes Survey will also look at opinions about trans people for the first time.

Morgan said: ‘No-one should have to face discrimination or live in fear because of who they are. We must set the pace on this agenda and lead the way in better understanding and supporting our trans people.

‘That’s why I am delighted to announce that we will be reviewing the Gender Recognition Act - helping overturn an outdated system and ensure the transgender person’s needs are at the heart of the process.

‘It’s fantastic to see trans issues increasingly on the public agenda. But we still don’t know enough– that’s why we are going to work with transgender people to understand more about the issues facing them.’

But trans activist and political commentator Jane Fae called it a ‘lot of polite words signifying precisely nothing’.

‘After an inquiry that ranged wide and radical, the government has allowed hopes to be raised, and dashed them all in one damp squib of a response,’ she told Gay Star News.

‘So much positivity: so very, very little delivered.’

She added: ‘They note. They look at. They consider. In almost every instance where they have been asked to commit to change, they have turned aside, promising not to do anything, but to think more deeply. Where they have endorsed change, it is mostly to echo commitments we thought settled years ago.

‘They will no longer view transgender as a mental illness: how big of them! Those with experience of the area thought this had been achieved ten years back. Our mistake.

‘Elsewhere, the call is for more and more and more evidence: or in other words, government is clear that this is to be kicked into the long grass.’

Nicky, can you explain more about this support, because I'm not seeing anything that isn't equivocation. https://twitter.com/nickymorgan01/status/751015572196954112

Here’s the government response to the #transinquiry in full, in one tweet:

“We have read the report.”

For any of you reading the #transinquiry response, I've made a bingo card so you can play along at home 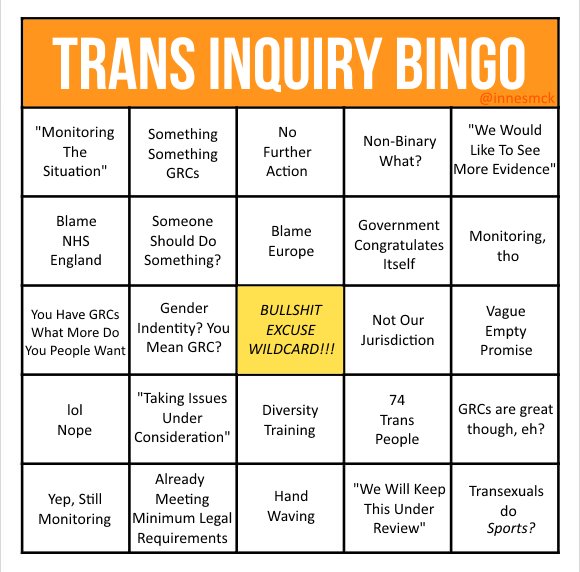 LGBT+ Lib Dems said: ‘We’ve read the government’s response to the Trans Inquiry. We’re not impressed that after this long, all they can promise are more reviews. We believe, contrary to what the government say, that more than enough evidence has been collected to justify action already.

Part 5 of the Transgender equality series